Tomorrow the Senate Education Committee will vote on an expansion of Indiana's private school voucher program that was ruled constitutional today by the Indiana Supreme Court.

In wake of today's court ruling, the Milton Friedman Foundation, one of the leading pro-school voucher organizations in the country, announced that Indiana's current program could make more than 530,000 Indiana students eligible for taxpayer-funded vouchers to attend private schools.

All public school districts will suffer, financially and in the loss of students, if the current voucher program is expanded under HB 1003. Millions of additional dollars will be shifted from public schools to private schools. That would result in fewer learning programs, less remediation, and larger class sizes for the state's one million public school students. All students deserve quality educations, not just those who receive vouchers.

Please join ISTA and other public school supporters from across the state and share your opposition to HB 1003. Contact members of the Senate Ed Committee today and share your support for strong and well-funded public schools in every Hoosier community.

Support public education by contacting the Senators listed below. Tell them to vote NO on HB 1003 tomorrow.

The future of public education is in our hands. Please email TODAY from your personal or home computer.

The Value of YOUR ISTA Membership!


Look for more information from ISTA soon!
Posted by fwea at 6:52 PM No comments:

Horace Mann is offering two retirement workshops at the beginning of April, 2013.

The first is on April 9 at Albion Elementary in Albion, Indiana (Central Noble). 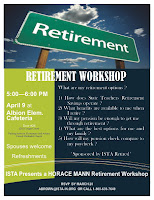 The second is on April 10 at Norwell High School in Ossian, IN (Northern Wells). 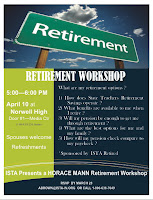