Below is the flyer for a TRF/PERF meeting on September 17, from 5 pm to 7 pm at ANTHIS CAREER CENTER AUDITORIUM, 1200 South Barr St, Fort Wayne. Gail Zerheralis will be presenting the latest information on the changes to INPRS.

All members and their spouses are welcome.

Any teacher who is considering retiring within the next three years will want to attend. Ultimately it will affect all of us, but it will affect that group’s immediate retirement decisions. 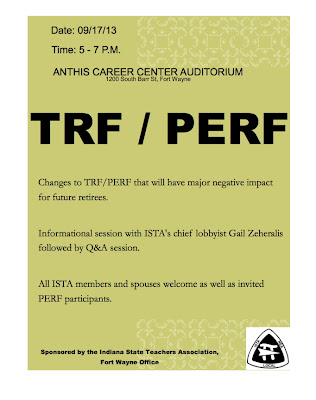 1. Eligible teachers* will receive $1,100 (pro-rated for part-time teachers) on their base salaries for 2013-14. Teachers who were rated Effective or Highly Effective during 2012-13 and have continued employment with FWCS will receive this base increase to their salaries.

2. Base salary for Bachelor’s Degree will be raised the next two years for new hires and eligible teachers* currently below the base salary level:

3. Base salary for Master’s Degree will be raised the next two years for new hires and eligible teachers* currently below the base salary:

4. New teachers hired in hard-to-fill areas may receive a stipend after completing a required minimum time period after consultation with the Association.

5. Teachers Incentive Fund grant money will be awarded to eligible teachers* in the form of a one-time stipend (following final calculation of evaluations with SIP scores included) during Fall 2013 as follows:

7. Per Indiana Law the only items that are allowed to be bargained are salaries and wage-related benefits. Items removed by law are now discussable.

8. Your FWEA bargaining team was able to also keep this language in the contract:
9. All Extra-Curricular stipends (formerly based on indices) will be rounded up the nearest $25.

10. All other former contract language remains intact and will be put in a Human Resource/Administrator/Teacher Handbook with a Memorandum of Understanding that requires official discussion with the Association before any changes are made.

11. The final contract will be available on the FWCS website and the FWEA blog: http://fweateachers.blogspot.com/

Once again, the Indiana State Board of Education (SBE), consistent with its past experience, flouts rules, transparency, meaningful debate, and process in its latest power grab targeted against Glenda Ritz, State Superintendent of Public Instruction.

At today's SBE meeting, member Dan Elsener presented an action item in the form of a resolution, without prior notification to Superintendent Ritz, who chairs the SBE, and without properly placing his resolution on the agenda for the committee's and, more importantly, the public's benefit and future input.

Elsener's resolution calls for him to chair a SBE-controlled committee involving more outside consultants and taxpayer spending to develop Indiana goals-something that the current Department of Education could and should accomplish by way of making recommendations to the SBE.

"Unfortunately, this kind of presumptuousness has become common practice with this and the prior administration's state board of education," said ISTA President Teresa Meredith.

At today's meeting, in the wake of Superintendent Ritz mentioning the need for compliance with Indiana's Open Door laws, a board member seconded Elsener's motion and the board passed the resolution without any substantive debate nor objection except for Ritz' clear abstention.

ISTA encourages its members to contact Gov. Mike Pence and ask him to remind the people he has appointed to the State Board of Education to respect process, transparency and Superintendent Ritz, the elected official who chairs the State Board.

It appears as though there are no bounds to the State Board of Education and the Governor's march to power-over and over-power Indiana's duly-elected state superintendent of public instruction, Glenda Ritz.

The first resolution offered by member Dan Elsener called for him to chair a new committee that is tasked with setting the goals for Indiana's education system-something that has always been within the purview of the State Superintendent's office-who also happens to be the lawful chairperson for the State Board of Education. The publicly-funded "Elsener Committee" will contract out with outside consultants, spending additional taxpayer dollars along the way to do the Department of Education's work. Elsener did not give Glenda Ritz, as chairperson, the courtesy of prior notice of his resolution and then called for action on the resolution even though it was not part of the meeting's agenda. Ritz suggested Open Door Law issues with this and then abstained from voting.

After over six hours of handling bona fide agenda items, the power grab continued with another resolution (again, with no prior notice to Ritz) indicating that the State Board of Education was hiring its own executive director, its own general counsel, and will use the Governor's new Special Assistant, charter school advocate Claire Fiddian-Green as its "technical advisor." Ritz was the sole opponent to this move.

"Both of these resolutions are thinly-disguised vehicles to wrest authority over public education policy-making from Indiana's duly-elected state superintendent and they not only disregard Glenda Ritz but the 1.3 million voters who supported her," said ISTA President Teresa Meredith.

"These attempts at discrediting, diminishing, and disrespecting Glenda Ritz and the agency she leads are partisan arrogance at the least and voter nullification at the worst," added Meredith.
Posted by fwea at 7:30 PM No comments:

The following are talking points compiled by chief ISTA lobbyist Gail Zeheralis regarding the changes to TRF/PERF. Please encourage share and take action!

1. It appears as though INPRS understands the issues surrounding current year teachers and their ability to retire and still come under the existing annuitization policy. Steve Russo, executive director of INPRS, in an email to me indicated that “The intent of the INPRS board was to make the changes effective on a date that would allow teachers to finish out the school year before having to retire. As you and others have pointed out, the rules specific to TRF would require a teacher to have a last day in pay status on or before May 31st, 2014. Now aware of this, I will recommend to the INPRS board a delay by 1 month that would in essence permit teachers’ to finish out the school year. The next INPRS board meeting is in September. I will see what flexibility we have in communicating the intent before the board considers the change in September.”

As you will note, Steve’s response is very much a teacher (TRF)-focused response. Other school employees (who might be under PERF) may not be jeopardized by a June retirement date, but I will investigate further.

2. The Pension Management Oversight Commission is meeting tomorrow (Tuesday, August 27) and Steve Russo is on the agenda to provide his annual report of the Pension Systems. I presume that the policy changes approved by INPRS dealing with the long-term rate and the outsourcing of the annuitization will come up because legislators who sit on the commission have likely heard about it. ISTA will testify if public testimony is scheduled. More likely, there will be a subsequent meeting on these changes specifically. Please stay tuned.

3. Nobody has really made the case that the annuitization change, in particular, is warranted. Even if there is rationale, there are many ways in which INPRS and/or the Legislature could address it—and INPRS took one of the most aggressive approaches—negatively impacting the most soonest.


~~~
Below is a link to an article from August 28. It gives you some figures to go along with the changes in TRF/PERF. Be on the lookout for a flyer regarding an informational session with ISTA’s chief lobbyist on 9/17. She will provide details on the changes, information she received from her meeting with the governing board, and will also entertain questions from the audience. It will be in Ft. Wayne...members and spouses will be welcome – as well as those in PERF such as police and fire as it affects them as well. More coming your way very soon!!!


~~~
Please use the link below to the Keep the Promise website to see an update on the changes to TRF/PERF. This will impact retirements for this year as well as in upcoming years.