The 2019 budget deal was announced on April 23rd and passed on April 24th to close the budget session.

Messages you sent to give K-12 schools better funding in the final version were successful! Thank you for your efforts!

The final funding for K-12 was higher than any previous proposal. This is true despite the latest revenue forecast that said Indiana would have $100 million less to spend. The grassroots pressure to raise K-12 funding was as high as I’ve seen it in the 23 sessions of the General Assembly that I have attended.

Despite the improvement in K-12 funding, the budget results present a mixed picture for public education in Indiana:
The good news in this list is tempered by the ease that voucher-supporting groups were once again able to expand vouchers and tax credits for private school scholarships. The heavy lifting required to get more money for public school teacher pay compared to the ease by which voucher programs were expanded raises questions about the future of public education in Indiana.

Does the supermajority General Assembly leadership really want public school teachers to feel supported and respected in Indiana? If public schools falter because teachers leave the state or the teaching profession, then parents will choose private schools and private schools will win the competition that the General Assembly began in 2011. Keeping good teachers is essential to the success of public education.

INDIANA SCHOOL FUNDING INCREASES FOR THE PAST SEVEN BUDGETS
Source: The summary cover page from the General Assembly’s School Formulas for each budget
Prepared by Dr. Vic Smith, 4-26-19

When the school funding formulas are passed every two years by the General Assembly, legislators see the bottom line percentage increases on a summary page. Figures that have appeared on this summary are listed below for the last seven budgets that I have personally observed as they were approved by the legislature.

Tuition support and dollar increases have been rounded to the nearest 10 million dollars. 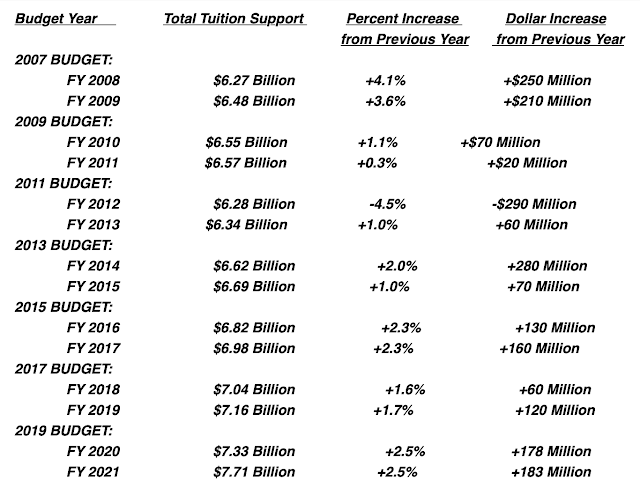 Total funding and percentage increases were taken directly from the School Funding Formula summary page. Sometimes in the first year of two budget years, the previous budget amount was not fully spent and the adjusted lowered base was used by the General Assembly to calculate the percentage increase.

Then the Governor’s plan to reduce pension payments by $150 million over two years was enacted.
Adding $150 million raises the total to $689 million.

Then categorical funding for specific programs like the Teacher Appreciation Fund received $74 million in new money.

Adding $74 million raises the total to the number you have heard: $763 million.

Most taxpayers have never heard of a 70% voucher. It appeared suddenly in the House budget without discussion or debate. Senator Mishler and Senator Bassler did not include it in the Senate budget approved by the Appropriations Committee, but on the floor of the Senate, the 70% voucher was put back in the budget by the Republican caucus on a second reading amendment using a voice vote. No roll call record is available of who supported this move toward more privatization of education in Indiana.

Here are the details:
Let legislators know that you strongly oppose the passage of the 70% voucher and that you think it undermines the effort to make more money available for teacher raises.


What are School Scholarships?

School Scholarships, not to be confused with Choice Scholarships, are scholarships for students to attend private schools given out by Scholarship Granting Organizations that collect donations for these scholarships, donations which give donors a 50% tax credit when taxes are filed.
Your messages to legislators during this budget session clearly made a difference. Let your legislators know how you feel about the various provisions of the final budget.

ICPE has worked since 2011 to promote public education in the Statehouse and oppose the privatization of schools. We need your membership to help support the ICPE lobbying efforts. As of July 1st, the start of our new membership year, it is time for all ICPE members to renew their membership.

Our lobbyist Joel Hand represented ICPE extremely well during the 2018 session. We need your memberships and your support to continue his work. We welcome additional members and additional donations. We need your help and the help of your colleagues who support public education! Please pass the word!

Go to www.icpe2011.com for membership and renewal information and for full information on ICPE efforts on behalf of public education. Thanks!

Some readers have asked about my background in Indiana public schools. Thanks for asking! Here is a brief bio:

I am a lifelong Hoosier and began teaching in 1969. I served as a social studies teacher, curriculum developer, state research and evaluation consultant, state social studies consultant, district social studies supervisor, assistant principal, principal, educational association staff member, and adjunct university professor. I worked for Garrett-Keyser-Butler Schools, the Indiana University Social Studies Development Center, the Indiana Department of Education, the Indianapolis Public Schools, IUPUI, and the Indiana Urban Schools Association, from which I retired as Associate Director in 2009. I hold three degrees: B.A. in Ed., Ball State University, 1969; M.S. in Ed., Indiana University, 1972; and Ed.D., Indiana University, 1977, along with a Teacher’s Life License and a Superintendent’s License, 1998. In 2013 I was honored to receive a Distinguished Alumni Award from the IU School of Education, and in 2014 I was honored to be named to the Teacher Education Hall of Fame by the Association for Teacher Education – Indiana. In April, I was honored to receive the 2018 Friend of Education Award from the Indiana State Teachers Association.