Speaker Bosma has signaled that state funding for our K-12 students could be a disaster this year, the lowest since the Great Recession.

Speaker Bosma dashed prospects for an improved state budget for our K-12 students when, as the Indianapolis Star reported on 11-21-18 (p.2A): “Bosma said lawmakers may have as little as $50 million left in new money to distribute.”

He said the Department of Child Services “will require a $270 million a year increase from their current budgeted line” out of the “$350 million in new revenues” the state is anticipating.

Speaker Bosma is not even saying the $50 million available will all go for K-12 funding, but let’s assume it does. Where does that put funding for our K-12 public school students?
One way to dismantle public education is to fail to fund it.

Study the table below to see the history of funding increases in the past six budgets:

INDIANA SCHOOL FUNDING INCREASES FOR THE PAST SIX BUDGETS

Source: The summary cover page from the General Assembly’s School Formulas for each budget

When the school funding formulas are passed every two years by the General Assembly, legislators see the bottom line percentage increases on a summary page. Figures that have appeared on this summary are listed below for the last six budgets that I have personally observed as they were approved by the legislature. 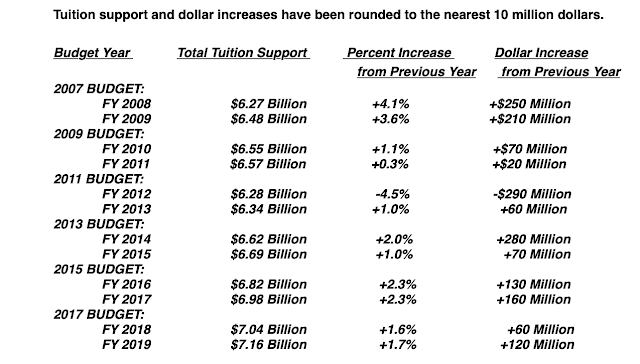 Total funding and percentage increases were taken directly from the School Funding Formula summary page. Sometimes in the first year of two budget years, the previous budget amount was not fully spent and the adjusted lowered base was used by the General Assembly to calculate the percentage increase.

Three Projections for K-12 tuition support as the next line in the table:

Public school advocates need to go to work to speak up for a better budget than Speaker Bosma wants.

These figures show the crisis at hand if Speaker Bosma’s plan goes through to max out K-12 funding increases at $50 million.

Surely in the best economy we have had in over a decade, the parents of over 1 million K-12 students would be angry if the education of their children is shortchanged by an outrageously low budget.

Talk to or send messages to your legislators in the House or Senate now before they return to begin the long session on January 3, 2019. Everyone’s help is needed to restore a high priority to funding for our K-12 students.

Thank you for your active support of public education in Indiana!

ICPE has worked since 2011 to promote public education in the Statehouse and oppose the privatization of schools. We need your membership to help support the ICPE lobbying efforts. As of July 1st, the start of our new membership year, it is time for all ICPE members to renew their membership.

Our lobbyist Joel Hand represented ICPE extremely well during the 2018 session. We need your memberships and your support to continue his work. We welcome additional members and additional donations. We need your help and the help of your colleagues who support public education! Please pass the word!

Go to www.icpe2011.com for membership and renewal information and for full information on ICPE efforts on behalf of public education. Thanks!

Some readers have asked about my background in Indiana public schools. Thanks for asking! Here is a brief bio:

I am a lifelong Hoosier and began teaching in 1969. I served as a social studies teacher, curriculum developer, state research and evaluation consultant, state social studies consultant, district social studies supervisor, assistant principal, principal, educational association staff member, and adjunct university professor. I worked for Garrett-Keyser-Butler Schools, the Indiana University Social Studies Development Center, the Indiana Department of Education, the Indianapolis Public Schools, IUPUI, and the Indiana Urban Schools Association, from which I retired as Associate Director in 2009. I hold three degrees: B.A. in Ed., Ball State University, 1969; M.S. in Ed., Indiana University, 1972; and Ed.D., Indiana University, 1977, along with a Teacher’s Life License and a Superintendent’s License, 1998. In 2013 I was honored to receive a Distinguished Alumni Award from the IU School of Education, and in 2014 I was honored to be named to the Teacher Education Hall of Fame by the Association for Teacher Education – Indiana. In April, I was honored to receive the 2018 Friend of Education Award from the Indiana State Teachers Association.